CONCLUSION
The minimal cell concept appears simple at first glance but becomes more complex upon close inspection. In addition to essential and nonessential genes, there are many quasi-essential genes, which are not absolutely critical for viability but are nevertheless required for robust growth. Consequently, during the process of genome minimization, there is a trade-off between genome size and growth rate. JCVI-syn3.0 is a working approximation of a minimal cellular genome, a compromise between small genome size and a workable growth rate for an experimental organism. It retains almost all the genes that are involved in the synthesis and processing of macromolecules. Unexpectedly, it also contains 149 genes with unknown biological functions, suggesting the presence of undiscovered functions that are essential for life. JCVI-syn3.0 is a versatile platform for investigating the core functions of life and for exploring whole-genome design. 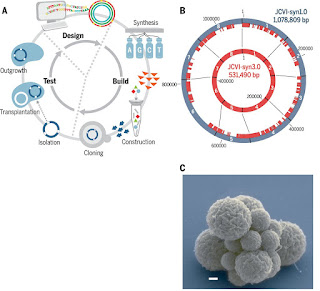 Four design-build-test cycles produced JCVI-syn3.0.
(A) The cycle for genome design, building by means of synthesis and cloning in yeast, and testing for viability by means of genome transplantation. After each cycle, gene essentiality is reevaluated by global transposon mutagenesis. (B) Comparison of JCVI-syn1.0 (outer blue circle) with JCVI-syn3.0 (inner red circle), showing the division of each into eight segments. The red bars inside the outer circle indicate regions that are retained in JCVI-syn3.0. (C) A cluster of JCVI-syn3.0 cells, showing spherical structures of varying sizes (scale bar, 200 nm).

Notice the use of Design in the Science article. The following is from [1].

The Simplest Living Organism Ever Has 437 Genes

You need at least 500,000 perfectly organized base pairs in order to have a living cell [2].

Excerpt: "If synthetic biology has a rockstar, it’s Craig Venter, and he’s back with a new hit. Venter and his team say they’ve created one of the simplest organisms theoretically possible using a combination of genetic engineering techniques, in-lab DNA-synthesis, and trial-and-error.

The work, published Thursday in Science, describes a self-replicating bacterium invented by Venter and his team that contains just 437 genes, a “genome smaller than that of any autonomously replicating cell found in nature,” according to the paper. The work sheds light on the function of the individual genes necessary to have life, and it also shows us just how little we actually know about specific gene functions."

My comment: The number of base pairs in a gene varies a lot. You need about 1,000 base pairs for having a 'simple' protein coding gene. But in some genes there are even 100,000 base pair in ONE gene. And you need at least hundreds of genes for creating a living cell. This means that in order to have a living cell you need at least 500,000 base pairs that need to be perfectly organized in their places. But genes by themselves are not able to form a living cell. You need much much more. Craig Venter's team tried to design a synthetic living cell by using complex computer software alone, but their every effort failed. The only way for creating a minimal living cell was to knock down genes one by one in a living organism, with  trial-and error, and find the final working combination of genes by which the cell was able to live and reproduce.

The message of this experiment is crystal clear: Random undirected processes are not able to create life. Life arises only from LIFE itself. Life is much more than a cocktail of chemical elements. The simplest living cell seems to be a super complex organism and it doesn't start to live without perfect design. Abiogenesis is a false theory. 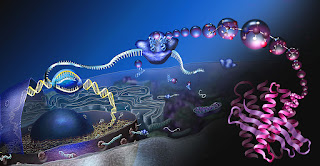